This year 15 cubs were born in the Portuguese breeding centre for the Iberian-lynx, in Silves (Algarve), five more than last year, was revealed last Tuesday.  Here you can learn about the stories behind some of the mothers of this seventh season of Iberian lynx breeding in captivity in Portugal.

In Portugal, the breeding effort of the Iberian lynx (Lynx pardinus) in captivity, to help re-establish the species populations in the wild, began with only four couples in 2010: Azahar and Drago, Erica and Enebro, Era and Calabacín and Espigaand Daman. This year the names are different. All but one, Era.

Today aged nine, Era is one of the six females that were matched for the breeding season of 2016/2017 at the National Center for Reproduction of Iberian-Lynx (CNRLI). Since this center opened its doors and received its first lynx, on 26th  October 2009 (Azahar, the lynx with the name of orange tree and that now lives in the Lisbon Zoo), there were born there almost 100 felines with beards and ears with brush tip. Last year 10 cubs were born and survived.

This year, with the male Fado, Era had two cubs on 17th March, according to a note from the Iberian Ex-Situ Conservation Program (i.e., outside the natural distribution zones). Last year, the only cub of this couple died after two days of life. This time the result was different. 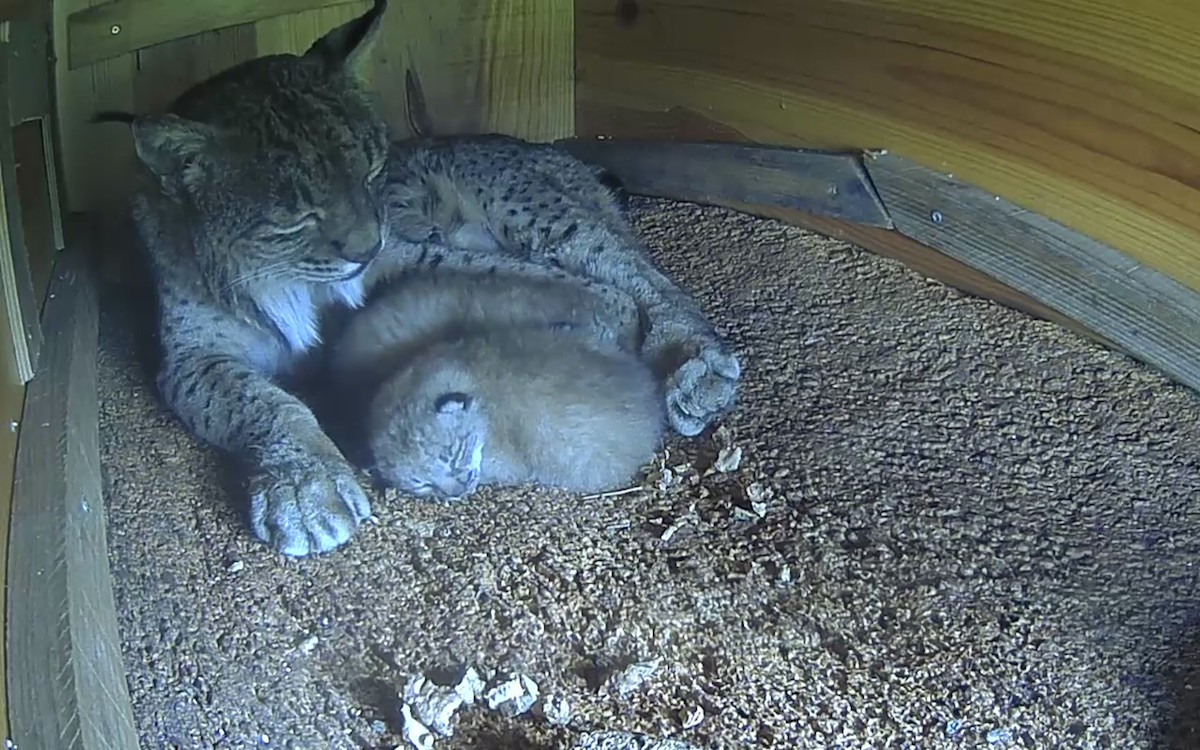 Era and her cubs

On 17th March, Era gave birth “in the middle of shrubs in her enclosure”, informs the same note. On 24th March, she took the two cubs into a nest box, “and then Era’s first normal successful birth in her nine years of existence was confirmed.”

Era was not born in captivity, like so many other lynx. She was born in nature, in Sierra de Andújar, Spain. According to the note, this female had “enormous problems of adaptation to the captivity” and “has been medicated for six years in the CNRLI. These problems of adaptation may have conditioned her well-being, anxiety and aggressiveness and reproduction.” But, these days, Era “seems to demonstrate accurate maternal instinct and the cubs follow their normal development “.

Unlike Era, Fresa  is an experienced mother. In 2015 she gave birth to three cubs (a birth that a Wilder team attended live at the CNRLI) and in total had 15 cubs at that center. This year, Fresa – the largest female of Silves, weighing 14 kilograms – was paired with Hermes and gave birth to four cubs the night of 26th March, in the nest box of her installation. “It is her second litter of four cubs and it was the first Hermes’s litter on the CNRLI.”

Biznaga, mother for the first time in 2011, and Drago were responsible for the first birth this season, on 28th February. The three cubs “are already starting to leave the nest box, at 30 days of age, and continue their normal development.”

Jabaluna, a cub that marked reproduction in captivity, became a mother

Three of the 15cubs in CNRLI were born on 25th March, daughters of Jabaluna and Jerte. They have a “normal look and vitality”. And a special mother. This female, now with five years old and mother for the first time, has marked the history of captive breeding of her species. 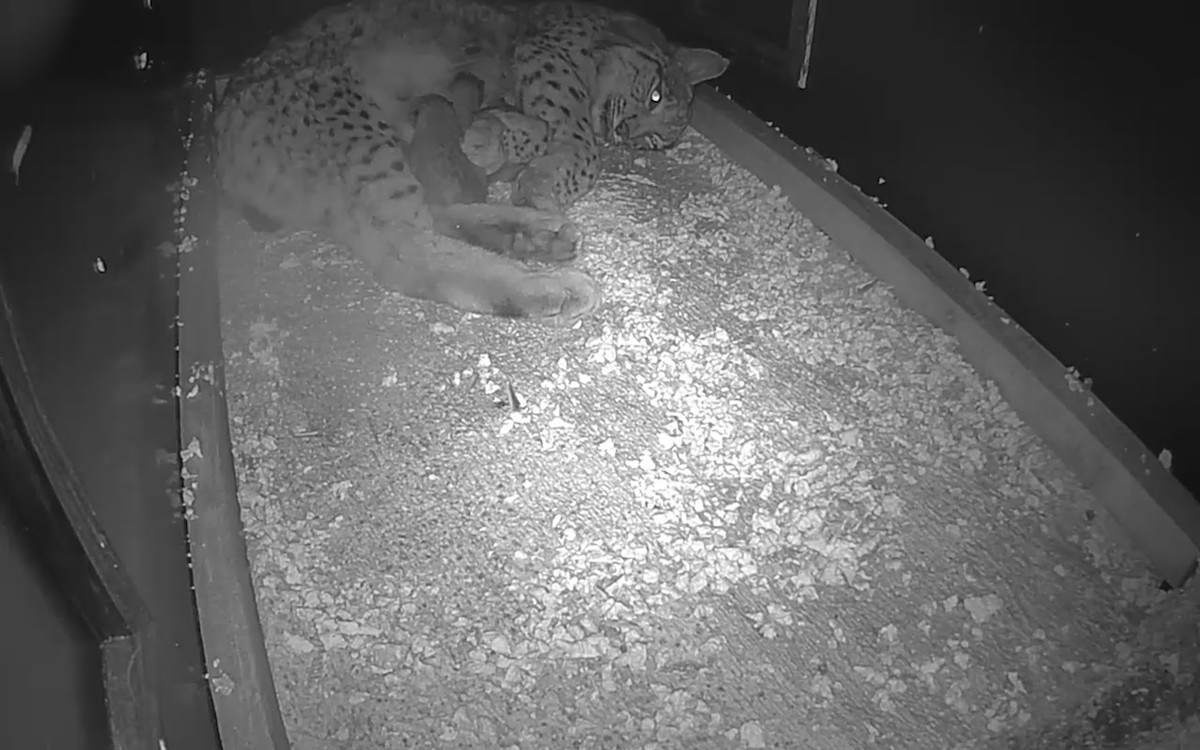 Jabaluna was born in March 2012 in the Andalusian center of El Acebuche. But her mother, Boj, soon abandoned her. Jabaluna, then a cub without a name, spent a week in intensive care in an incubator. It was the first time that a breeding center got a mother to take back a cub she had abandoned.

Now Jabaluna was mother for the first time.

“For an inexperienced female, she behaves as expected and manifests normal maternal behaviour, despite some predictable hesitations,” the press release reveals. The “cubs, in their nest box, follow their normal behavior”.

Flora and Madagáscar had three cubs on 28th March. “Flora will have given birth (…) in a nest in the middle of the vegetation at the bottom of her installation, which she shares with the male Madagáscar,” according to the statement. “The birth was confirmed only on 29th March when Flora moved three cubs from their nest to another nest in the vegetation relatively close to where they originally were.” Today, the three cubs are well and “Madagáscar seems to have visited mother and cubs around the noon last 29th March”.

According to the Ex-Situ Program, having both parents with a litter in the same shared installation “is an absolute novelty in the CNRLI”. But what is certain is that the animals “seem to cope well with the circumstance,” all the more since this has already been tried successfully by the El Acebuche breeding center in Andalusia in 2016. “It will be curious to observe, for the first time, the role of the male in the growth and development of the cubs.”

With these three new cubs, Flora has given birth to 11 cubs at the CNRLI, seven of which have already been reintroduced under the LIFE + Iberlince Program in the Iberian Peninsula.

For his part, Madagáscar, two years old, is a founding male from the population of the Doñana National Park, having passed through El Acebuche, and is genetically very important for the maintenance of the genetic diversity of the species for the future. He was father of his first litter in the Ex Situ Program of the Iberian Lynx.

Besides these 15 new cubs in Silves, the center team is still waiting to know if female Juromenha – the last potential female in 2017 at CNRLI – is pregnant as a result of the first attempt of artificial insemination performed on this species.

The Iberian lynx is a species classified as Endangered since 22ndJune, 2015, after years in the highest category awarded by the International Union for the Conservation of Nature (IUCN), Critically Endangered.

There are currently 483 Iberian lynx in nature, according to the definitive results of the 2016 census, revealed last week by the Iberlince program. Most of them, 397, are in the populations of Andalusia (Doñana-Aljarafe and Sierra Morena: Guadalmellato, Guarrizas and Andújar-Cardeña). In addition to these 397 animals, 19 live in Portugal, in the Guadiana Valley; 28 in Matachel (Badajoz), 23 in Montes Toledo (Toledo) and 16 in the Sierra Morena Oriental.

Follow our series “How an Iberian lynx is born” and meet veterinarians, video-watchers, caretakers and the rest of the National Reproduction Center (CNRLI) team in Silves.