A bearded vulture (Gypaetus barbatus) was seen and photographed by a German birdwatcher in the Algarve. The last time anyone had seen this species in Portugal would have been at the end of the nineteenth century.

The news was given last week by the Foundation 4Vultures (VCF). “At last what the Portuguese birdwatchers had been waiting for so long has happened: someone saw a beard vulture in Portugal, the first observation in the country since the end of the nineteenth century!”, the foundation wrote in a statement. 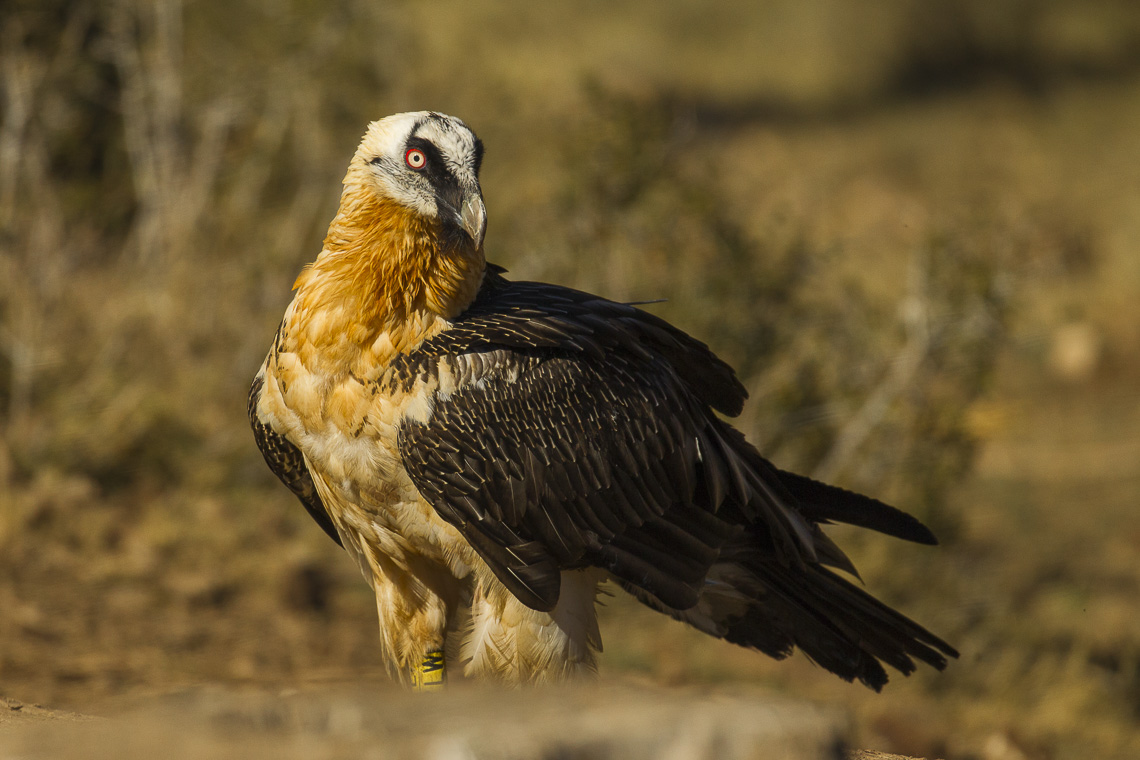 The beard vulture is one of the biggest vultures in the Old World and is considered extinct in Portugal. No records of its occurrence have been known since the end of the 19th century, according to the book “Aves de Portugal” (Birds of Portugal) (2010). The most accurate record is from 1888 when two birds were shot in the Guadiana River, in the south of the country. Today those two specimens are in the Museum of Zoology of the University of Coimbra.

Then, in 2011, three birds were seen in Beira Interior and in the Northeast of Portugal. And in May 2015, a female from Andalusia, Bujaraiza, – one of the vultures released as part of the project to reintroduce this species in that region of Spain – “was very much in the north of Portugal,” where it stayed for two days.

But these birds were never observed or recorded in photography; their presence was noticed because of the information given by geolocation devices.

Now, a German birdwatcher has sent photos of a sub-adult beard vulture to the VCF in the Algarve. “In one of the photographs we can see a ring in the bird. So we immediately suspected that the bird is one of the vultures released as part of the reintroduction project in Cazorla, Andalusia, 500 kilometers east”, adds the Foundation.

VCF contacted Spanish colleagues who confirmed the identity of the beard vulture. It is the vulture Rayo and it was in the Algarve on 6th and 7th May. Curiously, Rayo and Bujaraiza were released on the same day, on 31st May, 2014, and in the same place, in the Natural Park of Sierras de Cazorla, Segura and Las Villas (Jaén).

The project to reintroduce the beard vulture in Andalusia – from where the species disappeared in the 1980s due to poisoning and direct human persecution – began in 2006.

Until then there was only one population in Spain, the Pyrenean. The scenario changed with this project of reintroduction of the species, driven forward by the Junta de Andalucia and the Gypaetus Foundation. Since then, 49 birds have been released, all with GPS satellite transmitters.

On Monday, 14th May, the 50th beard vulture was released, in the same protected area of Cazorla. There are also planned releases of other vultures, one on 22nd May and two on 25th May. These two will be reintroduced elsewhere in the Sierra de Castril Natural Park.

At present it is estimated that there are two breeding pairs in nature in Cazorla and two others that have already established territories. In 2015, one of the breeding pairs – Blimunda and Tono – got the first chick in freedom since the extinction of the species in the region. This year the birth of the fourth young in the wild since the beginning of the program, was announced.

The beard vulture is the most endangered vulture in Europe, with just over 200 couples, 130 of them in Spain.

In 2017, 18 beard vultures were reintroduced into the wild within four conservation projects: six in Andalusia, two in Corsica, four in Grands Causses / Massif Central and six in the Alps / Pre-Alps.

Learn more about the beard vulture:

How a beard vulture looks like: this is a bird with almost three meters wing wingspan and up to eight kilos of weight. The plumage can be very dark in its juvenile phase and become clearer with the successive moults. But perhaps the best feature is the dark beard near the beak and bright red around the eyes.

Where it nests: on the rocky ledges of the great mountain ranges.

On what it feeds: this bird is the only one on the planet that feeds almost exclusively on bones, mainly ungulates. It can get to feed on bones with 20 centimeters, which digests thanks to its powerful stomach. When it can not eat unbroken pieces, it grabs them with its claws and throws them high into rocky areas to break them.

What are the largest populations of beard vulture in Europe: this is a species in danger of extinction in the Old Continent. The largest populations are those of the Pyrenean mountain range, Corsica and Crete. Globally, the International Union for Conservation of Nature has classified it as Near Threatened.