The last yews of continental Portugal, the oldest native trees in Europe, survive in Estrela and Gerês mountain ridges. This team is planting thousands of new trees and preparing these forests to the arrival of fire.

Forest fires are a major threat to the yew (Taxus baccata), a tree that can live more than 2.000 years. There was a time when this was an abundant tree in Portugal. But today it only survives in Estrela and Gerês mountain ridges, in the centre and north of the country, respectively. There are very few specimens in Madeira and the Azores.

“In 2005 a fire destroyed 79% of the largest core of yew in Estrela mountain ridge”, tells us Isabel Garcia-Cabral, the coordinator of project LIFE Taxus (July 2013 to December 2016), being managed by Quercus – National Association of Nature Conservation and co-financed by LIFE Nature of European Commission.

So, the prevention of fires is at the heart of this initiative, taking place on 50 hectares in the Peneda-Gerês National Park and on 15 hectares in the Natural Park of Serra da Estrela (in the Zêzere river valley, near the village of Manteigas).

The project team is made of two specialists, working in close collaboration with forest guards and the Conservation Institute for Nature and Forestry (ICNF).

Most yews spontaneously occurring in Portugal are in Gerês. “These trees grow along the water lines in enclosed valleys. They need shade and humidity in the soil”, explains Isabel Garcia-Cabral. Here in Gerês, the project’s goal is to maintain and improve the habitat of yews on 50 hectares, all public lands in the hands of ICNF. It is a management that wants to make these forests more resilient to fires. “We have made fire prevention actions, such as combustible material cleaning and opening fire fighting strips.” 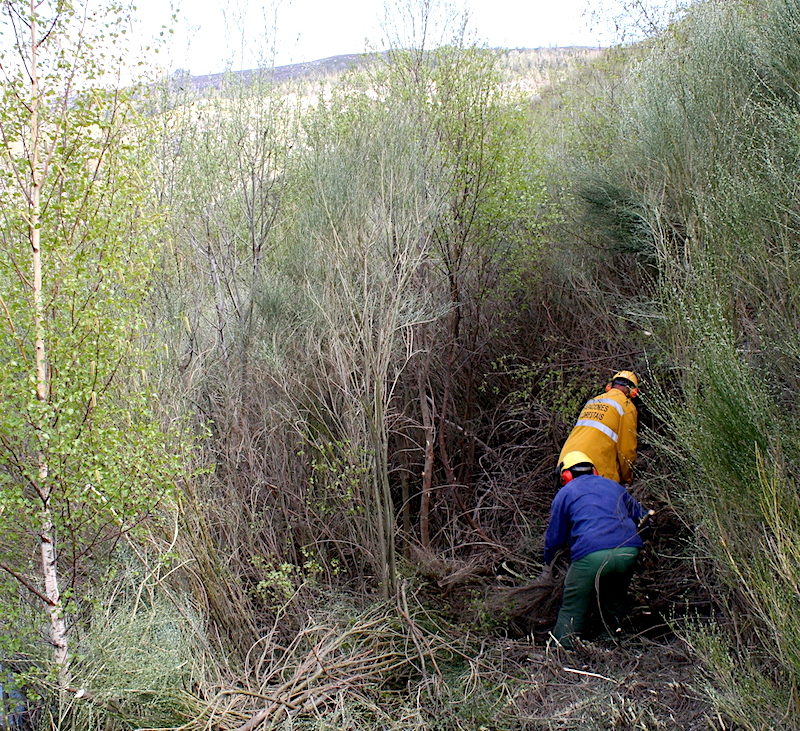 There are fewer yews in Estrela. “They are isolated trees, almost extinct”. And they occur in a highly threatened area by the fires. Here, the work is all about a selective management of weeds, in order to reduce the combustible load, and to create an edge to the grove of yews, to defend them of the fire.

“Provided there is cleaning of combustible material in excess and regular maintenance of the forest, with easy access, the fire does not spread much and is easier to fight”, adds the coordinator of the LIFE Taxus.

In this mountain ridge the strategy goes a little further than in Gerês. “We chose 15 hectares to manage, to take care of the yews that exist, but more. We also want to increase the area of yews”, she says. So far they have planted about 15.000 trees in these 15 hectares, uncultivated land in the hands of forest fire-fighters.

“Of these 15.000 trees, 40% are yews and the other 60% are accompanying species such as holly, pyrenean oak, common oak and rowan. According to Isabel, those accompanying species support the yews, especially when they are young and very sensitive. These species make up the clumps of yew and create humidity and shade conditions that the yews need to grow”.

“All planted trees are seeds that were harvested in the Estrela and then germinated in a tree nursery of ICNF in Malcata, Sabugal. We want to help stop the yew extinction, to increase the number of plants in Estrela and to maintain those in Gerês.”

At the end of June this year, the technical team made a monitoring to the trees planted. “The percentage loss of yew is very low, less than 10%”, said Isabel.

Giving these trees a hand becomes essential, since the yew has a very slow growth. “A yew tree takes about 50 years to get to be an adult tree”, says Isabel who knows of a yew in the Estrela mountain ridge “which has close to 70 years”. So, when there are few specimens, natural regeneration is very low”. And if we add forest fires, grazing, the misuse of forest and the threat of climate change, the scenario is not very optimistic.

The fires of the last days have not reached the project area in Estrela, said Isabel. Yet there is no information as to what have happen in Gerês.